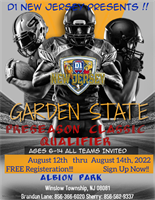 This is a D1 Nation Qualifier for D1 Nation NYFC National Championships on December 18-20 in Atlanta, GA. Teams must qualify at a qualifying event in order to participate in Nationals. All teams must be SPORTSCERT/NSID

We have assembled one of the nation’s strongest youth football scouting teams which is proud to present the nation’s first pre-season ranking youth football tournament. There will be multiple opportunities for teams to compete in this prestigious National Preseason Tournament in August. This national tournament which consist of top teams from around the country, guarantees (3) three games over this exciting weekend. Teams will compete in (age only) brackets, this is an unlimited weight tournament. Age brackets are as follows:  6u, 7u, 8u, 9u, 10u, 11u, 12u, 13u & 14u teams will play for the top rankings in their respective age divisions in the nation. Don’t miss this opportunity to prepare your team for a championship season by competing against the best of the best.

CERTIFICATION  -   ALL TEAMS WILL CERTIFY THE FRIDAY. PRIOR TO FIRST GAME . TEAMS MUST HAVE OFFICIAL STAMPED LEAGUE ROSTER  WITH BIRTH CERTIFICATES OR STATE ID.   ALL PLAYERS MUST BE PRESENT - PLAYERS CANNOT BE ADDED AFTER THE FIRST GAME.. PLAYERS WILL BE ISSUED WRISTBANDS THAT MUST BE KEPT ON THROUGH OUT TOURNAMENT ...NO EXCEPTIONS

1st  Place Trophies or Rings  in all brackets or showcase game!!

5U/6U - 20 min half , 2 time outs per half , Clock stops on change of possession , inside 1 minute,and time-outs. Coaches allowed on field
- No Kick-Offs . Offense starts at their own 30 yd line.
- No Punts -  Punts will be walked off 20yds from line of scrimmage
- Extra points - Running 1pt  , Throwing 2 pts
- Defensive players cannot line up over center

7U- 8U - 20 mins per half  , 2 time outs per half , Clock stops on change of possession , inside 1 minute  and time-outs. No Coach’s allowed on the field.
- Kick offs and Punts are mandatory
- Extra points - Running 1pt  , Throwing 2 pts
- Defensive players cannot line-up over center

Overtime -   In case of overtime  , Ball will be placed on the 20 yd line.  Each team will have the oppotunity to advance the ball and score. Should one team score and the opposing team is stopped, then the team that scored wins.   If both teams score the same amount of points , then the ball is placed on 10yd and each team has 4 plays to score.  If the game ends in another tie , then the final overtime will be determined by penetration.


Coach’s Passes and Chain Crew Passes
Coaches must have on Coaches passes to be on the sideline.  Head coach will be issued wrist bands at registration. Wristbands must be worn the entire weekend.  All coaches and chain crew must be signed in.  We will only issue wristbands once.   Each team will be issued 8 wristbands, 6 for coaches 2 for chain crew.
Every team will have 2 people designated for the weekend for chain crew.   Whoever is the home team will use their two people , the away team will use one of their people from the crew. This is a MANDATORY!!!

Parents are not allowed on playing field ,  Any team violating this rule , will be issued a 15yd penalty at the 1st warning.  2nd warning , Head Coach will be removed from the game.

All event related questions should be directed to BRANDON LANE at BRANDONCORYLANE@GMAIL.COM or call 856-366-6020.