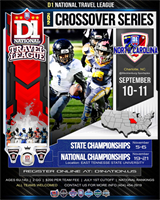 Here is some information about the 2022 D1 Travel League ..

Certtification:
-  July 1 Cut-Off
-  Acceptable forms of ID .. State ID , Original Birth Certificate,School Report Card
-  Each player will be required to get a D1 Player Membership for $25
-  Membership includes Individual Player Insurance
-  Each player will recieve Hard Copy Photo ID which will be presented before each game
- Membership will include a discount towards All American Bowl Uniform Package

CERTIFICATION - ALL TEAMS WILL CERTIFY 1 HR PRIOR TO FIRST GAME . TEAMS MUST HAVE OFFICIAL STAMPED LEAGUE ROSTER WITH SPORTS CERT ID ALL PLAYERS MUST BE PRESENT - PLAYERS CANNOT BE ADDED AFTER THE FIRST GAME.. PLAYERS MUST PRESENT THERE SPORTS CERT HARD COPY ID ...NO EXCEPTION

GAME TIME IS GAME TIME - FAILURE TO SHOW UP ON TIME WILL RESULT IN FORFEIT ... DO NOT CALL US !!!

High School Rules . Clock stops on all regular football situations
Clock will start ON THE READY WHISTLE after :

Clock will start ON THE SNAP (1st Touch)

a) Scores
b) Change of Possession
c) Time outs

Game time is game time: If team is 15 minutes late game will be forfeited.

9U-14U -10 minute quarters , 2 time outs per half , Clock stops on change of possession , incomplete passes and time-outs.
- All Special teams

Overtime - In case of overtime , Ball will be placed on the 20 yd line. Each team will have the oppotunity to advance the ball and score. Should one team score and the opposing team is stopped, then the team that scored wins. If both teams score the same amount of points , then the ball is placed on 10yd and each team has 4 plays to score. If the game ends in another tie , then the final overtime will be determined by penetration.

Weight: Weight is unlimited for this tournament.

Uniforms: Each team must have a home and away jersey.Home Team- White ,Visitors - Dark.

Coach’s Conduct:
We expect coaches to behave professionally. Any verbal or personal attacks on referees or staff will not be tolerated. Coaches will be issued one warning. After the initial warning , the coach in question will be expelled from the competition and will not be allowed to coach the next game.

Coach’s Dress:
Coach’s must have on Team issued shirts or spirit wear. No t-shirts, wife beaters or flip flops allowed.

Parents/Fans
Parents are not allowed on playing field , Any team violating this rule , will be issued a 15yd penalty at the 1st warning. 2nd warning , Head Coach will be removed from the game.

All event related questions should be directed to Eric Marshall / Kevin Jones at d1nationnorthcarolina@gmail.com or call (704)649-7462.