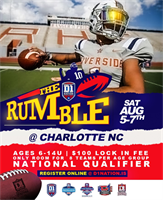 We wanted to thank you for coming to the 3rd annual Rumble @North
Carolina . The top two teams in each age group qualify to participate in our Nationals December 16-19 in Atlanta.

Time now is 4:39 , we will resumne play in 15 minutes , please make your way back to the fields

Our plan is to let this weather system
pass and continue wear we left of. We will notifu
you when to return to the field.

1. The final schedule has been posted - click here
2. Please be reminded thaat team Check-in is 1 hour prior to your first game . All players must be present . If you have not submitted your roster on exposure events , please bring a copy with tou
3.. Discounted Advance ticket sales will end @ 3pm on Friday. Please let your parents know . Click here for tickets

Welcome to the 2nd Rumble @ Charlotte . Here is some information to make your experience enjoyable. This a National Qualifier , the top two teams in each age group will recieve Automatic Bids to our D1 National Championships Dec 16-19 in Atlanta. Winning teams will also be included in our National Rankings; This email will supercede all previous communications.

Admission:
We will not be accepting any cash at the gate. All tickets must be purchased online . A link will be provided for your convenience when the schedule drops. TICKETS WILL GO ON SALE TODAY

Thank you for participating in the 2nd Annual Rumble @ Charlotte . Here is some information to help

1. Schedule will be out later today no later than 5:00 pm today!

3. Rosters: Rosters have been emailed out on exposure events management
form and will need to be filled out no later than Thursday COB

Nation Qualifier for D1 Nation NYFC National Championships December 16-19 in Atlanta , GA. Teams must qualify at a qualifying event in order to participate in Nationals. All teams must be SPORTSCERT/NSID

Welcome to the NYFC National Championships . The Gauntlet Play-off Series will consist of National Qualifiers located in some of the Nations Football Hotbeds such as OH, TN, MO ,GA , SC, AL ,PA, IN, NY , IL ,KY

We has assembled one of the nation’s strongest youth football scouting teams which is proud to present the nation’s first pre-season ranking youth football tournament. There will be multiple opportunities for teams to compete in this prestigious National Preseason Tournament in August. This national tournament which consist of top teams from around the country, guarantees (3) three games over this exciting weekend. Teams will compete in (age only) brackets, this is an unlimited weight tournament. Age brackets are as follows: 5u, 6u, 7u, 8u, 9u, 10u, 11u, 12u, 13u & 14u teams will play for the top rankings in their respective age divisions in the nation. Don’t miss this opportunity to prepare your team for a championship season by competing against the best of the best.

All championship games will be broadcasted nationally, via live stream on D1 Nation Sports Network The time has finally come to leave the polling behind and EARN your national ranking! For more information email d1nation@yahoo.com 404-454-2919

CERTIFICATION  -   ALL TEAMS WILL CERTIFY  1 HR PRIOR TO FIRST GAME . TEAMS MUST HAVE OFFICIAL STAMPED LEAGUE ROSTER  WITH BIRTH CERTIFICATES OR STATE ID.   ALL PLAYERS MUST BE PRESENT - PLAYERS CANNOT BE ADDED AFTER THE FIRST GAME.. PLAYERS WILL BE ISSUED WRISTBANDS THAT MUST BE KEPT ON THROUGH OUT TOURNAMENT ...NO EXCEPTIONS

1st and Second Place Trophies in all brackets !!!

5U/6U - 8 minute quarters , 2 time outs per half , Clock stops on change of possession , incomplete passes and time-outs. Coaches allowed on field
- No Kick-offs
- No Punts -  Punts will be walked off 20yds from line of scrimmage
- Extra points - Running 1pt  , Throwing 2 pts
- Defensive players cannot line up over center
- Mercy Rule:  After 20pt lead -  Game will turn into running clock  -  MERCY RULE -NO BLITZING or LINING UP OVER CENTER.


7U- 8U - 8 minute quarters , 2 time outs per half , Clock stops on change of possession , incomplete passes and time-outs. No Coach’s allowed on the field.
-No Kick offs and No Punts
- Extra points - Running 1pt  , Throwing 2 pts
- Defensive players cannot line-up over center
- Mercy Rule:  After 20pt lead -  Game will turn into running clock  - Mercy rule no blitz

Overtime -   In case of overtime  , Ball will be placed on the 20 yd line.  Each team will have the oppotunity to advance the ball and score. Should one team score and the opposing team is stopped, then the team that scored wins.   If both teams score the same amount of points , then the ball is placed on 10yd and each team has 4 plays to score.  If the game ends in another tie , then the final overtime will be determined by penetration.
Mercy Rule:  After 20pt lead -  Game will turn into running clock


Parents are not allowed on playing field ,  Any team violating this rule , will be issued a 15yd penalty at the 1st warning.  2nd warning , Head Coach will be removed from the game.

All event related questions should be directed to Harold Thompson at d1nation@yahoo.com or call 4044542919.